skip to main | skip to sidebar

Is that your poker face?

This may have been my most memorable Labor Day weekend ever. There were several factors that played into this. 1. It was the first one I had off since I started working in retail 6 years years ago. 2. Philip and I accompanied some friends to hang out with their friends in Detroit. 3. We saw LADY GAGA in concert!
The highlight of the weekend was Lady Gaga, but I'll get to her in a minute. The rest of the trip was awesome. It was so nice to get out of town with fun people and not be in charge of anything. We just rode along and did whatever was happening. It was almost like a mini vacation, relaxing and fun. By the way, when I say Detroit, I really mean one of the several suburbs around the city and I never knew which one I was in. Ever. We left for Detroit on Friday evening right after work. I didn't really know how long it would take to get there.. and it took longer than I thought... but I enjoyed every minute of being the passenger. We arrived late that night and hung out with good wine and chats.
On Saturday, we got up at a leisurely time, watched the most recent Project Runway on Tivo, then went to a local orchard to have apple donuts. These are not apple fritters as I assumed they might have been, but were in fact donuts with apples in them, which were even better that they sound. Our next stop was the local mall for last minute wardrobe ideas and lots of window shopping all over the place then off to a late lunch at Panera, where the cashier at the sight of six stylish yet casually dressed men, asked if we were from Canada. I'm taking that as a compliment. I do love those Canadians. After a quick stop at the "store" for champagne and red bull, we were off to the house to prep for the pre-party and get dressed. 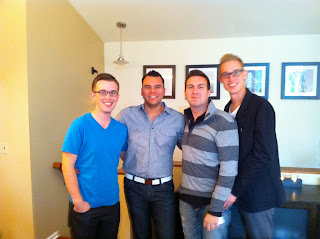 We went with a group of 12 people total and decided to roll in style with this seemingly wonderful stretch limo, which turned out to be a bit of a letdown with a failing music system and not so helpful driver, but nonetheless was hip hip fun! 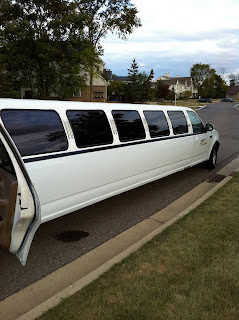 The view from inside. You know when you pass a limo on the highway and always stare and try to see who is inside? Well, you can't and it turns out that you look pretty stupid to the people on the inside. Note to self: do not stare at limo, unless it might be someone famous inside :) 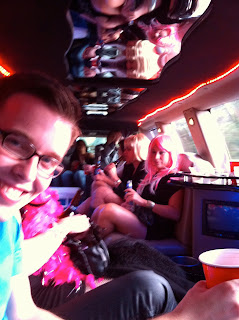 Before the show started it looked pretty empty, but those holes filled up quickly as Gaga took the stage. Our group had a private suite where we had a private bathroom, sofas, tv, bar area and 12 seats right outside. The freedom of moving around and hanging with people added to the experience and made it amazing. 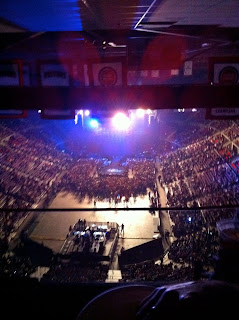 "Is that your Poker face?"
This pretty much sums up how happy everyone was all night long. 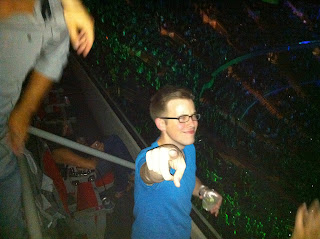 After the concert, we reloaded ourselves into the limo and headed to a local bar where we ruled the place. It was not packed when we arrived and our group was the hit of the hour, or at least we thought we were. The highlight there was when songs from Glee came on and the crowd went wild. We arrived home sometime later and hit the sack.
The next morning when we all crawled out of bed, or in my case the air mattress on the floor, packed up and headed to Cracker Barrel for brunch and then headed out of town. On the way home we swung by the outlet malls in Michigan City and then made a final stop at Hacienda for dinner to round off the weekend. So amazing!
Posted by dlt at 9/08/2010 06:54:00 PM 17 comments:

I've worn the same brown shoes to work five or more days a week for well over a year. I love them dearly, but recently it has come to the point where I need to retire them a few days a week. I think they are still In great shape and go with everything, right, however partnered with my poor posture and sole tread I decided to begin the search for new shoes. It has been a long 6 weeks of searching... Seriously. Philip almost refuses to go shoe shopping with me anymore because, as he puts it, I am a bit particular. In my mind, if you're gonna drop $100 or more on shoes, they better be comfortable, look hot, and last a long time. Our joint search started at a shoe store in Andersonville where I tried almost every brown dress loafer style in stock, and one oxford that I did not even ask for. I felt so guilty after having someone help me for so long that I just bought the pair that I hated the least. I work in retail and I know how it feels to help someone who walks out empty handed. The very next day, less than 24 hrs later, I returned the heavy clunky unattractive shoes. After several trips later to DSW, which btw is somehow overwhelming and under exciting , other local shoe stores and even a few in Kokomo, Indiana, I am still shoeless today. Cut to a few hours ago and Piperlime.com, which I have always had a secret love for, but never used. After virtually searching all the mens shoes in size 13 and brown, I narrowed it down to this pair below.

Philip and I , along with Franklin are in Indiana visiting Philip's parents for a few days. We are sitting outside on a lawn chair under an umbrella stairing at the intersection of a corn field and a soybean field spread out over acres of rich land. While I could never live in a place as rural as this, there is much to appreciate in the relaxation and quaintness that it offers. I always look forward to our short trips here full of food, family time, and so much relaxing. It is nice to get out of the urban oasis that Chicago is every once in a while and just be in a place where life is different.
Franklin doesn't know what to do with himself. He has a house full of carpet with space to run his crazy laps far bigger than back home and a yard with what seems to be unlimited grass to rub his head in and rollover. He has had that, not so attractive, crazy frenchie face for well over an hour at this point from overheating his poorly designed but adorable body. Ringo, the older and wiser resident yellow lab doesn't seem to appreciate Franklins antics and attempts to alarm him into "play mode". He just lays there waiting for some diversion of the attention and hopes for a dog rub.
Posted by dlt at 8/22/2010 01:13:00 PM 6 comments:

I first heard about Zoku at a work conference in Phoenix over the summer. I was immediately intrigued. It is a Popsicle maker that freezes juices right in front of your eyes in as little as 7 minutes. Every time I mentioned this to Philip he ridiculed it completely. Long story short, Philip saw a video on how to use it and wanted one. I got it for him for Christmas and it has been in use nearly every day since. We keep the unit in the freezer all the time and bring it out to make fresh Popsicles with an array of fruit juices and nectars. Today I decided to try to make a yogurt pop, so while shopping I saw a bottle of Blueberry Kefir, a smoothie drink, and snatched it up, rushed home and made my very first non fruit juice pop. It was delicious and froze super fast. Below is a photo of my Kefir pop and our trusty Zoku. If you are ever over, don't forget to ask to make your very own pop! 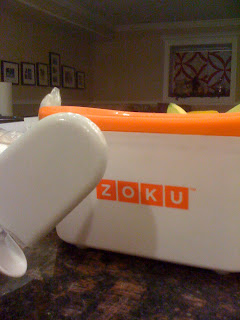 I never drive the expressway to work. I always take city and suburban streets and love that I don't have to get on I-94. One of my favorite things on my route to work is the drive thru Starbucks where most of them know my drink by heart :) Anyway, after work I had to go to a store in the city and the best way to get there was to take 94. So off I go with my back seat full of boxes blocking my rear view sight. For some reason I think West is the right way to go. I think the suburbs had me turned around. West goes to to Wisconsin and I definitely did not want to go to Wisconsin. I think quickly and get out my handy new GPS and before she gets all started up I get off at the next exit thinking I could just turn around. Wrong. That exit went East and no U-turns were allowed. Anyway, my GPS kicks in and starts yelling to me in her very nice British voice, "turn now...recalculating....go .2 miles and turn left....turn now....recalculating" and on and on. Still going the wrong way I turn into a small mall parking lot to turn around. I finally make it on the expressway going the right way and make it into the city. One would think I don't know my way around, but I think I'm too comfortable that I don't even pay attention anymore. Now I know. Pay attention.
Posted by dlt at 1/18/2010 08:23:00 PM 2 comments:

the death of a tree

Tomorrow is the last day to get your Christmas Tree recycled in Chicago, and yes, we still have our Christmas Tree standing. At this moment Philip is un-decorating the tree while singing Christmas Songs and whining about how Christmas was only 3 weeks ago but feels like forever ago, followed by some statement about how much he loves Christmas.
Luckily for me tearing down Christmas decorations is not as important as putting them up for Philip, when every ornament I hang is constantly scrutinized for proper location. Decorating tends to work best when we each do something when the other isn't home and then the other "fixes" it when the first isn't home. I think we are down to a system now.
We hope to get this tree to Margate Park by tomorrow so that the city can mulch it and continue beautifying our parks and wherever the heck else they put thousands of Christmas tree mulch. I figure this little donation will save me a dollar down the road somewhere, right? If we succeed we will have made ourselves a bit greener than last year when we missed the cutoff date and had our tree in the house into the beginning of February. I vaguely remember dragging the carcass through my condo hallway to the back door and sometime later purchasing a saw to hack the poor thing into pieces small enough to fit into our dumpster. I remember vaguely as if it was a bad dream that should have never happened.
So back to un-decorating I go and to greenifying Chicago a tiny bit more.
Posted by dlt at 1/16/2010 09:53:00 PM 5 comments: 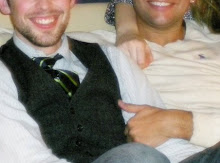